In terms of Deity interaction, the mudra works with the mantra to invoke the qualities and protection of Garuda.

In terms of Yoga , the Garuda Mudra activates the blood flow and the circulation. It also helps alleviate exhaustion.

  Clasp your thumbs and place your hands, the right on top of the left with the palms facing inwards, on your lower abdomen. Remain in this position for about ten breaths.

  Later slide your hands to the navel. Remain there for another ten breaths.

  Then place your hands on the pit of the stomach and remain for another ten breaths.

  After this, place your left hand on the sternum, turn your hands in the direction of your shoulders and spread your fingers.

Some sources have the hands the opposite way round, as shown here: 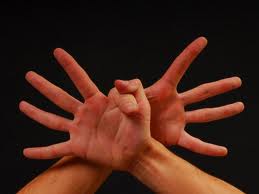 This mudra is used to purify offerings and beings, and to protect against obstructions such as those form illness and spirits.  One example is its use prior to Kusali Tsog.